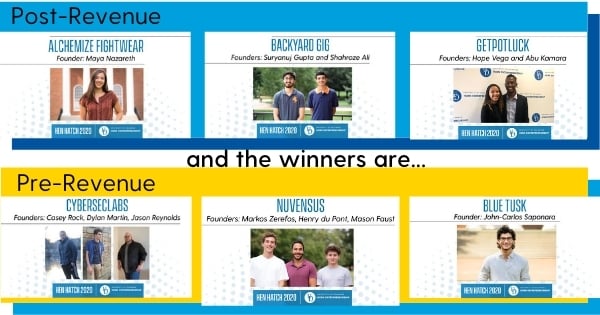 After multiple preliminary rounds and weeks of preparation leading up to the University of Delaware’s premiere startup funding competition, Hen Hatch’s final round took place virtually on Thursday, Dec. 3. The evening featured six competing finalist teams that have built their startups up while enrolled in undergraduate work in order to pitch before judges and attendees at Hen Hatch.

Additionally, the event was sponsored by Placers, Devlin Law Firm LLC, and Belfint, Lyons, & Shuman. Senior Instructor of Entrepreneurship and Faculty Director of Venture Support Vince DiFelice served as the event host for the evening.

The event concluded with the awarding of a $50,000-value prize pool which included cash, in-kind gifts, and support and resources for future competitions. To read more about each respective finalist startup, click here.

The following finalists and awardees compose teams from the Pre-Revenue Track:

The following finalists and awardees compose teams from the Post-Revenue Track:

Alchemize Fightwear, by Maya Nazareth, BE20, was awarded $11,033 as well as 10 hours of professional accounting work from Belfint, Lyons, and Shuman valued at $2,500.

Additionally, all six finalist teams received up to $2,500 worth in support and funding towards travel expenses and other resources to continue cultivating their startups through their participation in 3rd party entrepreneurial competitions.

DiFelice concluded the event by urging attendees to stay in touch with the many promising teams of both finalists and semifinalists which have participated over the course of Hen Hatch preparations. Students derive long lasting connections and invaluable growth opportunities through their networking and engagement within the Horn ecosystem and community. A directory of Hen Hatch participants and each teams’ contact information can be found here.