The Cost of Free Press with Michael Friedenberg 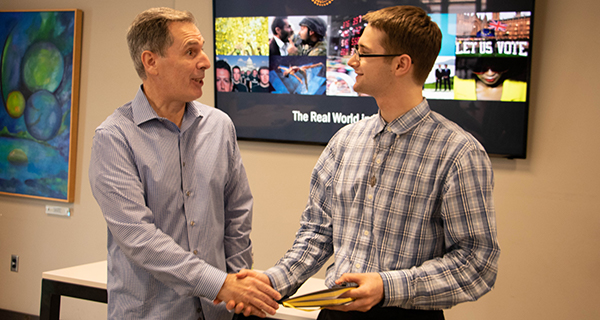 It took 27 years for Michael Friedenberg, President of News and Media Operations for Reuters, an international news organization, to return to UD for a visit. The Entrepreneurship Club, a student-run organization supported by Horn Entrepreneurship, invites entrepreneurial alumni and community members to share their insights with students on a weekly basis during Free Lunch Friday. Michael shared Reuters’ views on freedom of the press in international spaces and why factual based reporting is important.

Friedenberg ’89 earned a degree in economics from UD’s Alfred Lerner College of Business and Economics. He started his career as an account executive selling ads to tech companies and ended as CEO of International Data Group (IDG). During his retirement in 2017, Reuters sought him for his open leadership style and his willingness to experiment with change. Reuters recognized his entrepreneurial style was congruent with safeguarding digitally delivered international news.

Michael, speaking to a crowded room full of students, said he felt part of a “higher mission to be part of a news organization who spends more on safety for their almost 2500 journalists than any other portion of the company. Reuters asks journalists to get into the center of the story even under dangerous conditions to tell the story first hand.”

When asked about his entrepreneurial experience at UD, he fondly remembered his days on Main Street. At the time, he became inspired by the movement of Mothers Against Drunk Drivers (MADD). Realizing bars on Main Street did not serve food, Michael drove to Philadelphia to buy soft pretzels to sell. It was an instant success and in a short time, he became Newark’s bar supplier of soft pretzels.

Maintaining free press around the world

Michael attended the White House Correspondents' Association Dinner in April where the underlying theme was an emphasis of a bipartisan history of supporting a free press and the integrity of reporting it.

Friedenberg shared, “This is Reuters’ mission in the news space and we push for that first-hand, real-time factual reporting. The safety of journalists is number one, but the resilience and courage our journalists have in defending a belief in reporting factual news and freedom of the press is something I am proud of.”

Second to the safety of Reuters journalists is the charge of minimizing digital disruption. Today that could mean a number of things, from fake news, or cyber warfare, to technical advances.

“Normally disruptions happen in a sequential pattern,” he explained, “from unregulated to regulated entities, then to government entities. At the moment we are seeing systemic disruptions in all areas.”

The free space of social media and digital connections has proven to be difficult to regulate as new influences seek to manipulate the perception of truth.

Friedenberg cautioned that we need to better learn how to navigate the news for accuracy. The most common term heard today is fake news. Friedenberg explained, “Fake news is really facts mixed with human bias, and it is difficult to control. It is magnified through various means of social media platforms and opinion-based news outlets.”

Free Lunch Friday will return this fall for another semester of enthralling speakers, terrific food and great company. Stop by the VDC on Friday’s at 11 a.m. to join in the fun!