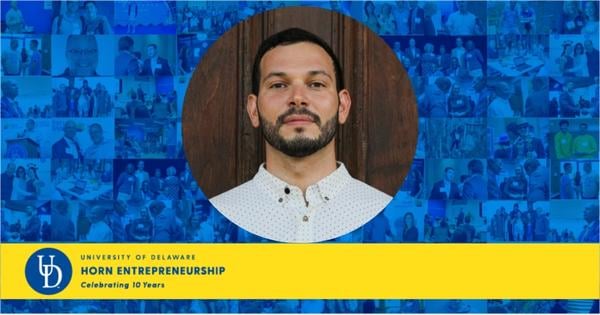 This article is part of a series celebrating the 10th anniversary of Horn Entrepreneurship by highlighting alumni, their stories and accomplishments.

“It was a great pleasure and honor” to be building that community, Rapkin recalled. “I’m somebody who is motivated by challenges, and I wasn’t finding that in my normal academic life at the University of Delaware. This gave me an opportunity to create a challenge and to work as hard as I felt like I could, to do something that I felt was meaningful. Along the way came all of these wonderful connections with students and faculty and all of this support from Dan and the team he was building.

“And I got to build really great friendships that I still have today. I got to create something from a blank slate that I thought would be valuable to others, and others eventually communicated to me that was valuable to them. I think it really helped me to understand my own capabilities and to take something and build it in my own vision and build something from nothing, with the help of others.”

While at UD, he and Austin Crouse, a mechanical engineer who minored in entrepreneurial studies, founded ProjectedU. After graduation, Rapkin co-founded the Wilmington History Society “to learn from others’ experiences, ask challenging questions and stress test your ideas against experts.”

Today he is general manager of LIGHTGLASS, which “improves lives by bringing the daylighting experience into windowless spaces” with simulated windows and skylights.

It all started with his wide-ranging interest in music and UD’s open academic agenda. In 2015, Rapkin was the second graduate of Horn. “All it took was a year off from music school, halfway through his degree to realize that entrepreneurship was truly his calling,” technical.ly wrote in 2016. “He created examples for future students to learn from, even if it meant learning through failure.”

Rapkin grew up outside New York City and picked UD to study multiple musical instruments: percussion performance and jazz piano. Most colleges limited students to just one genre or instrument.

He wanted more than music. The Dean’s Scholar Program allows students with a certain GPA to design their own program. His Bachelor of Arts in liberal studies –combined music, entrepreneurship, public policy and management information systems. It ended up involving a “ridiculous number” of credit hours – about 170.

“It was about learning to solve problems from different perspectives,” he said. “Programming is very mathematical, which is what we did in MIS. Public policy is a different approach to solving problems that involves structured analysis. And then entrepreneurship is a totally different way involving hypothesizing and iterating.

“I wanted to become a good problem solver, and there are a lot of things I care about. I wanted to fix higher education. I was very frustrated, and I was living in it. So we started ProjectedU as a Band-Aid to help students while we uncovered the root causes of higher education issues.”

“ProjectedU technology acts similar to previews at a movie, but with university and employer information,” he wrote in an essay on technical.ly. “It is a communication platform that displays images and videos to students before class begins using the room’s existing projection system.”

“Our intention was to help students make the most of their time in school, things like job opportunities, new academic programs, on-campus events, new professors and profiles on professors,” he continued in the interview.

“We found a great set of customers in the likes of Fortune 500 companies who were trying to recruit students from very specific programs of the university. We were able to target just those students with job and internship opportunities. Right at the end of our pilot in the business school, we were able to create an interactive feature that allows students to apply and respond to these job opportunities from their personal devices – while they were sitting there a few minutes before class began. Austin deserves huge kudos for building a system that worked the first time and every time.

“We were also able to get the attention of Wawa, Target, JPMorgan Chase, Vanguard and CSC to advertise. It was advertising, but the content was very carefully selected to be valuable to students.”

Before that, Rapkin was database manager for a company now known as Carvertise, which had been founded by UD students Mac Macleod and Greg Star. He was hired to grow a database of drivers willing to be paid to put ads on their cars. “I was able to multiply the size of that database – which had only  100 people when I arrived – by doing guerrilla marketing tactics. Some things were just throwing spaghetti at the wall and trying things out, but other things were a bit more thoughtful.

“After a few months, I realized that I wanted to spend my time in another way and invest in solving different problems. And so I separated myself from that team but still talk to Greg and Mac.”

His desire to be exposed to different situations led him to Inside-Out, a program uniting traditional college students and incarcerated persons in semester-long courses. And he grew in internships. On LinkedIn, he lists Second Act Studio, Smart Money Entrepreneurs, the US Senate and SevOne. Through them, he learned about artist management, crowdfunding for startups, government, and software as a service. “Those were pretty entrepreneurial experiences as well,” he said. “And I had a million ideas with each experience. It’s all part of the journey.”

Growing by getting out

Another part of that journey was quitting his first post-graduation job – sales and then marketing for Parse.ly – while he was attending the Diamond Challenge Summit (Horn’s unique full-day conference for youth centered on innovation and entrepreneurship).

“It was a small software company. I was the 34th employee, and I got a set of stock options. It was work from home, flexible hours, whatever you wanted, free snacks and drinks. They would take us on international trips. It was like a dream job on paper, but I was just extraordinarily unhappy. I was asking ‘Why am I so unhappy in this amazingly, wonderful situation?’ ”

The answer: “I wasn’t challenged. I had automated myself out of my job. I had made it so that a computer would basically do everything that I needed to do – a prioritized list of sales leads delivered every week. So, I was just getting bored.

“I went down to the Diamond Challenge Summit at UD and was surrounded by all these entrepreneurial high schoolers and all my old friends from Horn, and I was reminded of what it was like when I was challenged. It was so fun. So I picked up my phone, called my boss and gave my two weeks while I was standing there in the conference center.”

He chose to travel until he ran out of money. He then moved back in with his parents and regrouped. Horn, once again, played an important role.

As founder and president of the Entrepreneurship Club, he had found speakers for Free Lunch Friday, Horn’s program of guest speakers. “One of the key ways that we built the initial community of students who were interested in entrepreneurship was by hosting these talks, and it’s one of the most important things I could have done to build my own network.”

One of the first speakers was UD alum Sean Darras, founder of LUXTECH, which makes “light engines, the guts of LED light fixtures,” Rapkin said in a video about LIGHTGLASS. “And when I was on the market looking for work in 2018, he heard that through the Horn community and invited me to do an interview for his new company, LIGHTGLASS. Rapkin became the first full-time employee.

The right light has been proven to have both psychological and biological benefits.

“Light is such an important and powerful element, and we haven’t been using it to its full potential,” he said in the video. If you have daylight, great. But if you don’t, well-designed LEDs can mimic it.

“The purpose of LIGHTGLASS is to provide as many of the benefits of real sunlight as possible,” he said. “We’re tricking the mind into thinking you have daylight coming into a space and providing the spatial experience of a window. Places with windows feel better than places without windows.”

LIGHTGLASS installations are more sophisticated than lamps sold to fight seasonal affective disorder. They look and act like regular windows (maybe even covered by sheer drapes), clerestories and skylights. They can be made in any rectangular size, up to 4 feet by 8 feet, he said in the video. LIGHTGLASS is also tunable, meaning it can regulate the circadian rhythm to wake people up in the morning, to invigorate people, and soften in the evening, to encourage sleep.

About 45% of the business is in healthcare. The firm has also outfitted many schools (K-12 and universities), offices, retailers and even high-end homes (the types with underground bunkers and golf simulators). Local clients include a local children’s hospital, Target, Goober’s Garage in Wilmington and a co-working space called REC Philly on Philadelphia’s Market Street.

And back to Horn

The LIGHTGLASS headquarters is in Philadelphia’s Old City, near the Liberty Bell, in a building with floor-to-ceiling windows on three sides. “We have beautiful morning light, and basically during all work hours it’s great viewing and lighting,” he said.

Its manufacturing plant is in Boothwyn, Pennsylvania. That building is windowless on two sides, so of course they have LIGHTGLASS installations.

He now lives in the very trendy Williamsburg section of Brooklyn. With plenty of natural light. “My apartment has unobstructed windows facing south, east and west, providing ample sunlight at all times of the day, so I can practice what I preach,” he said.

His support for the program is clear. “Congratulations to Horn for 10 years,” he said. “When I was in school, the Free Lunch Friday speakers would say ‘When I was in school, we didn’t have anything like this.’ And now, when I go to visit Horn, I’m like wow, Look how far they’ve come. Look how many more resources are provided to the students.”