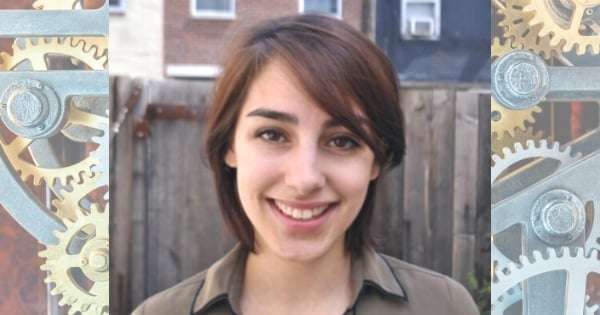 Anna Solomon is sales manager at NextFab, a Philadelphia makerspace. At UD, she earned a bachelor’s degree in entrepreneurship in 2015.

What type of entrepreneur are you? I’m an intrapreneur, and that’s all about solving problems within the company. I started out with engineering. Both my parents were industrial engineers, and I know that they solved problems, and that’s what I wanted to do as a career. But through Horn I learned that there are problems in every stage of a company’s life, not just in the startup mode, but five and ten years down the line. I’ve been at NextFab for four years, and it just celebrated its 10-year anniversary, and I’m continually involved in scaling efficiencies to increase customer satisfaction.

After thanking your parents, who else would you thank? My academic adviser, Tricia Monnig. I started out at UD as a mechanical engineer, and it took me several years to figure out that wasn’t what I wanted. So I next focused on marketing and then economics. I always liked creativity and communicating ideas, and I wanted to find a place with like-minded people, and I walked into Horn and found that. When I showed up at the end of my junior year, Tricia was able to figure out how to squeeze in the courses I needed and convert others to be able to earn my degree.

What course was the most meaningful for you and why? There were two, both with Tony Middlebrooks. One was Social Entrepreneurship (ENTR420), and the other was Creativity and Design Thinking (ENTR356). I’m a hands-on learner. I don’t do well with memorizing things from a textbook and parroting back the answers. Before these courses, I never realized that creativity and problem-solving were such assets, important things that employers looked for. It was really eye-opening. Also revelatory was how there are a lot of ways to be an entrepreneur. You hear mostly about tech startups, unicorns that begin in someone’s garage. But there are many, many ways to be an entrepreneur.