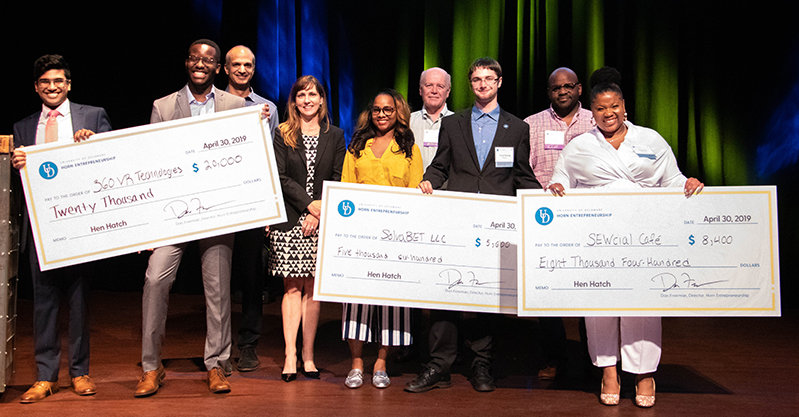 Horn Entrepreneurship is pleased to announce all of the success and honors our fantastic community of creators, scientists and doers have accomplished this quarter.

360VR Technology, led by Suryansh Gupta and James Massaquoi, has been quite busy lately. The virtual reality security company advanced to the final round of the Big Bang! Business Competition, qualified for the regional competition of Startup World Cup 2019 and advanced to the final round in the Richard Barrentine Values and Ventures Competition at Texas Christian University. If that wasn’t enough, 360VR was also selected to be a part of the Emerge Americas 2019 Startup Showcase in addition to competing at the SXSW festival.

Wilminvest, led by Bryce Fender and Joel Amin, signed their first tenant. The socially conscious venture has stayed true to their business model with Horizon House on the books.

The following teams have been awarded grants for the promising work completed to this point.

Spekciton received a for $100,000 from the Delaware Bioscience Institute Entrepreneurial Proof of Concept fund.

SentenceWeaver and RiKarbon were accepted into the National Science Foundation I-Corps Teams with a $50,000 grant.

Smartenius, led by Hao Liu and Erik Thostenson, W7 Energy, led by Lan Wang, Santiago Rojas-Carbonell and Yushan Yan and Amplus, led by Yuping Zeng and Kazy Shariar were each awarded a $150,000 UNIDEL grant to further their progress and research.