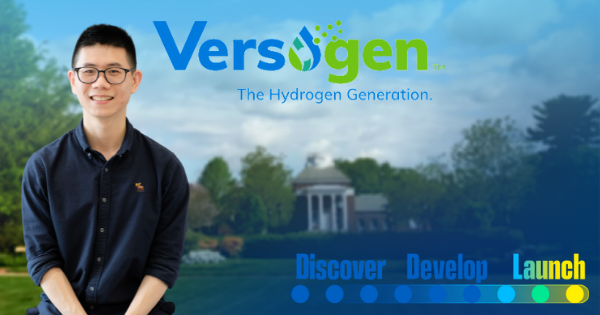 This article is part of a series describing how UD Horn Entrepreneurship assists teams in moving their inventions and innovations into the marketplace, a process known as commercialization. Each team receives a customized blend of resources, including training, mentorship, and funding, through the Blue Hen Proof of Concept Program.  Mentorship and support is also provided by Horn Entrepreneurship partners, including the Office of Economic, Innovations and Partnerships and Delaware’s Small Business Development Center.

Lan Wang was a UD graduate student and postdoc, now Versogen’s Director of New Chemistry and Cofounder, who led the effort to scale the world’s leading polymer membrane technologies for converting water into green hydrogen. Green hydrogen because renewable solar or wind sourced electricity is used to free the hydrogen from water molecules (H2O). The global hydrogen market is large and growing, and a process that is less expensive, more reliable, and happens without greenhouse emissions would help Versogen play a key role in the reduction of carbon emissions in future years. “Technology already existed that produces hydrogen for chemical synthesis and oil refining. What is innovative about Versogen's technology was to produce affordable green hydrogen at scale with zero-carbon-emissions. Versogen created a product that had commercial traction, and it was met with excitement from potential customers.” Wang said.

The name Versogen is a combination of versatile and hydrogen. Hydrogen is veersitale becasue it can be used in many industrial processes for deep decarbonization that cannot be happen with clean electricity. Hydrogen is currently used to refine fuels to make them more effective, and in synthesizing ammonia found in fertilizers. The global demand for hydrogen is 60 million tons a year, and is rapidly growing. Industries currently use fossil fuels to obtain hydrogen for use. This is referred to as gray hydrogen, because it consumes methane or coal as an energy source in the process, and releases 830 million tons of carbon dioxide (CO2) annually. Versogen has developed a series of anion exchange membranes (AEM) and AEM based technologies that eliminate the use of fossil fuels in the creation of free hydrogen for further use. Instead, the Versogen AEM electrolyzer uses renewable energy to split water into oxygen and hydrogen. This would have a global impact on reaching net-zero carbon emissions.

In three short years, the Versogen team has grown to 14 highly specialized employees and three full labs while developing AEM technology and its applications. In comparison to other AEM technologies, Versogen offers the state-of-the-art product that is lower cost, chemically stable, ironically conductive and mechanically sturdy, and so, its contribution to the market is game-changing.

Wang was already certain the technology would change the renewable energy market, but moving the technology from the lab into commercial product started with the University of Delaware's Office of Economic Innovation and Partnerships (OEIP). OEIP recommended the team participate in the NSF I-Corps Sites program administered by Horn to support a feasibility study to determine the potential success of the startup.

A first step, a common place to begin for most tech teams, is to participate in the NSF I-Corps program. As co-founder and technological lead under the grant, Wang remembers the struggle of getting out of the comfort zone as a scientist and seeing his technology from a view of a businessman. He was curious about the process of entrepreneurship, but still shocked by the fast change of preconceptions and ideas once entering the NSF I-Corps Sites program. With the help of the program, he adopted the idea of being open to feedback and modify as needed to find the real product-market fit and strengthen Versogen’s value proposition.

After completing NSF I-Corps the startup progressed quickly. The Versogen won the first Fast-Pass in 2019 that provided lab space at the Delaware Innovation Space, but the team attributes much of their growth to Horn Entrepreneurship's Blue Hen Proof of Concept (BH-PoC) program, a program that provides support during the initial phase of technology commercialization. “Once we spun out from the university, BH-PoC allowed us to buy the equipment we needed to actually commercialize our product. This enabled us to get additional funding from the Department of Energy, the State of Delaware and the Unidel Foundation, and others since then, which provided us with the explosive growth we've had to date,” Wang recalls.

BH-PoC has three components that allowed Versogen to become even more viable as a startup, because the program addresses hurdles startups face when moving away from the university. First, funding is necessary to the product prototypes, and to provide samples to customers who have become paying customers. Second, mentoring by a team of knowledgeable and experienced professionals provides guidance on topics ranging from marketing and Human Resources to leadership development and legal matters. The last component is the mock Board of Directors sessions. These sessions are designed to subject participants to rigorous assessment and conversation with external industry advisors and venture capitalists, so they can improve their ideas. 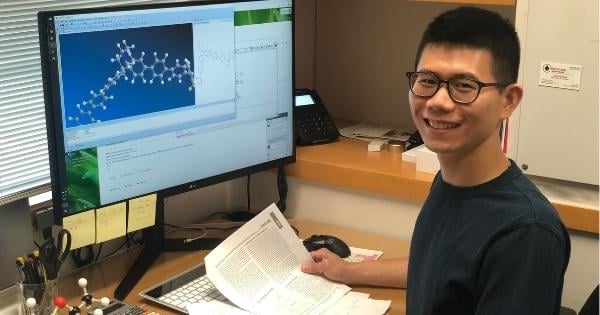 Versogen is supplying hundreds of square meters of AEMs to more than 50 companies and institutes, one of which has deployed its water electrolyzer systems all over the world with Versogen’s membrane inside. As a platform technology, Versogen’s AEMs have also been integrated into many other climate technologies, including fuel cell, ammonia synthesis, direct air capture and CO2 reduction. With the help of Versogen’s AEM technology, an Israel fuel cell company is moving their AEM fuel cell closer to launch phase. Direct air capture and CO2 reduction, the carbon-negative technologies to produce green fuel, are also rapidly developed by companies in the US and Europe using Versogen’s membrane. The initial market success on membrane encouraged the Versogen team to look to the future and develop their own water electrolyzer stacks for green hydrogen, a market of trillion dollars.

When Wang was asked what he learned from his experience working with Horn Entrepreneurship, he responded with how he approached the idea of commercializing the technology.

At first, I thought entrepreneurship was an abstract idea, in which you start a company in a garage, sell products, and then you end up holding a billion-dollar company. Instead, it is really a series of small everyday progress that pushes your technology to market. Entrepreneurship is a voyage. You have to step out your comfort zone willingly, keep an open mind and be ready to listen. Incorporate feedback from your customers, your advisors, your colleagues and you will find the true path to success.