The Art of Innovation 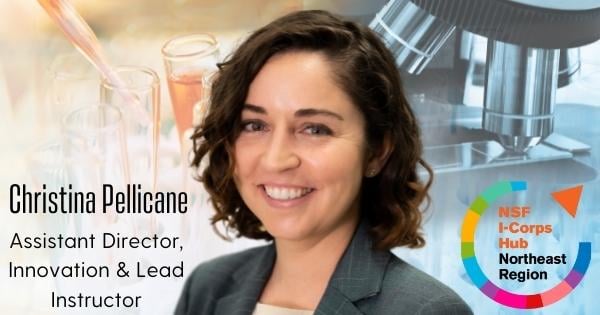 Like a connoisseur of fine art, Christina Pellicane both understands and enjoys the details, technique and principles of commercialization. She’s spent most of her career on just that - making an impact through innovation. Her work is reminiscent of a Jackson Pollock painting - drips and splashes dotting the canvas - it is purposeful and groundbreaking.

Christina first thought about the impact of research when she worked at Venenum Biodesign, a company specializing in drug discovery. Inspired, Christina began to percolate on the idea of impact within the science community. Her journey took her to AlcheraBio as a clinical business administrator and study monitor, before she landed at the NYC Regional Innovation Node as executive manager.

The NYC Regional Innovation Node afforded Christina the opportunity to build an entirely new program from scratch. She began training scientists and engineers on the National Science Foundation (NSF) Innovation Corps (I-Corps) process, an approach to early stage commercialization. Through her work at the Node, she created a network and connected dozens of regional universities focused on entrepreneurship.

“Having a community of like-minded entrepreneurship educators, program managers and program alumni that I helped flourish made me even more passionate about focusing on early stage startup formation and growth,” recalled Christina.

Still wanting to increase her impact on the world, Christina founded Antevasin, a Sanskrit word meaning “one who lives at the border.” The name resonated with Christina because “it was a nice way to describe the entrepreneurship experience of stepping into the unknown, but also the concept of having one foot in science and the other in business.” Her company specializes in entrepreneurship education and new program development

Christina moved to the University of Delaware in 2016 and led the commercialization initiative at Horn. During her tenure as director of commercialization at Horn, she expanded programming to include a $2MM Proof of Concept fund, skill building workshops and advanced mentorship program. Her work with the Proof of Concept fund resulted in 25 startups who raised $12MM and created 94 jobs.  Christina also led and was co-PI of the NSF I-Corps program at UD, in which she trained 142 teams who received more than $1.2MM in funding after completing the program. In addition to growing the commercialization initiative, Christina joined Lignolix as COO, a startup exploring the application of a plant-based alternative to petroleum based chemicals.

Christina’s role at Horn changed as she pursued other dreams, and she became lead mentor with the Venture Mentoring Service. Her focus was on coaching teams on business model development, grant writing, and securing non-dilutive funding sources.

According to Christina, “Helping entrepreneurs, scientists and engineers is my way of contributing.”

Christina’s latest endeavor is with Princeton University and the new National Science Foundation Innovation Corps (I-Corps) Northeast Hub.  She has a dual role as the assistant director of innovation and lead instructor for the Hub.

The Hub, launched this month, will serve as the center of a regional network for entrepreneurial training to support the development of activities and grow the nation’s capacity to transform scientific discoveries into tangible societal benefits. The Hub’s principal institution is Princeton University, with Rutgers University and the University of Delaware as partner institutions and five regional affiliates.

“Doors will open across the Hub because of this collaboration - the connectivity and visibility into university programs will allow cross pollination and cross promotion, within I-Corps and beyond,” said Christina.

Applications to the first I-Corps regional program are due January 31, 2022. The I-Corps program provides specialized training and mini grants of up to $3,000 to teams interested in exploring the commercial viability of their ideas for products and businesses based on their own inventions, University intellectual property, or any STEM-related technology.

The I-Corps Hub Northeast Region is a coalition of universities that provides programs to help researchers explore the potential for scientific and technological discoveries to become products that can benefit society. Launched in January 2022 with a 5-year grant from the National Science Foundation (grant #NSF 2048602), the Hub is committed to serving researchers of all backgrounds with an emphasis on inclusive innovation. The Hub includes eight initial members: Princeton University, Rutgers University, University of Delaware, Delaware State University, Lehigh University, the New Jersey Institute of Technology, Rowan University and Temple University.