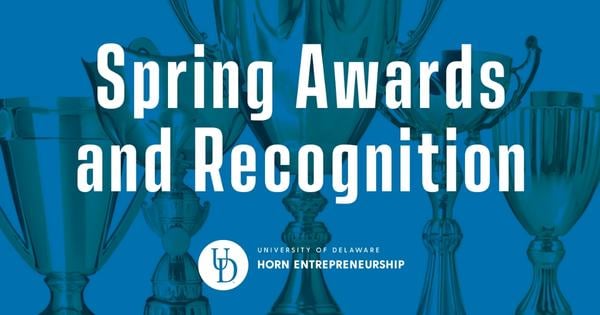 The last six months might have flown by for you, but the last six months these students, alumni, faculty and staff were building their businesses, becoming better students and professors, and more. Take inspiration from their achievements in this article.

Backyard Gig, a startup launched in mid 2020 by University of Delaware student Shaun Gupta, won the Alumni Ventures’ 10KE Program receiving $2,000 and the eMerge Americas 2022 conference startup showcase. This startup winning the eMerge Americas 2022 conference startup showcase is notable because only 100 startups were selected throughout the world for this showcase. Backyard Gig also won $2,000 in grant money through the Alumni Ventures’ 10KE Program. This startup was 1 of 25 in the country to receive a grant funded by the Alumni Ventures 10KE program. This grant was intended to help cover living expenses incurred during the internship or process of incubating your own startup.

Spray Less was in a technical.ly Delaware  article titled “With lessons from Carvertise and UD, the young founders of Spray Less are going ‘full force’”. This article is about David Breyla, Noah Lux and John Mouser dedicating all their time to their startup, Spray Less.

Chiron was featured in a Sanford School News article titled, “International Win for Sanford Sophomore's  Entrepreneurial Team.” This was the summit of the Diamond Challenge 2022 where They received $3,750 to be used as venture funding or for higher education scholarships.

Supremely Sweet won two competitions over the last six months. On the 3rd of May Supremely Sweet advanced to the quarter-finalsof the 2022 competition Pepperdine Most Fundable Companies. On the 4th of March, Supremely sweet made it to round 2 of 2022 semifinals of the Texas Christian University startup competition.

UP Cycle Design run by Sierra RyanWallick who received a press mention, in an article in  Vista Today,“Why This Landenberg Resident and Other Entrepreneurs Choose to Run Their Business”. Sierra RyanWallick has also received an Advisory Board Position at Girls for Business. She announced after receiving this position,”I am honored to announce that I have accepted an Advisory Board position for the nonprofit Girls For Business (GFB).” GFB is a non-profit organization based in the United States (but serving international participants).

On MSNBC Vladimir Krylov Ukrainian and Russian roommates unite the community at University of Delaware with a video interview.

On 3/21/2022 Miriam Keegan was featured in an article on UDaily titled a “Passion for sustainability” about promoting sewing as a means to reduce waste.

On 2/28/2022 TheraV received 2 recognition names. They achieved the Milestone: The first batch of TheraV ELIX 2.0 devices have finally arrived meaning you can purchase a device for anyone who deals with phantom pain from  a lost limb and wants relief. They also have an office at NextFab in Wilmington. They achieved the UBS Grants Program “Democratizing the Friends & Family Round, a grant given ” in partnership with Hello Alice.

Horn National Advisory Board member Grace Leong was named one of PRWeek's Women of Distinction.

TRiC Robotics won $1350 at the 2022 AngelCon pitch competition winning the Audience Choice Award. Tric Robotics, according to their website, is an automated, non-chemical treatment that makes farmers more profit with less treatment.

Nicholas Delmonico who is the founder and CEO of Strados Labs was chosen as one of the top 101 United States CEOs operating in the wearable technology space on Best Startup.

Cristina Archer is an Eco-entrepreneurship faculty advisor Geography Professor and she was awarded the Unidel Howard Cosgrove Career Development Chair in Environment. An article titled, “Honoring success, supporting future achievement” written about her in UDaily talks about her journey to receiving this position.

Dan Lee, assistant professor of entrepreneurship in the Alfred Lerner College of Business and Economics, recently edited the March 2022 special issue of the Journal of Economic Psychology on intergroup conflict. More information about the article can be found here.

Stephanie Raible is the author of Chapter 16 on Yunus Social Business’s fantastic leader, Saskia Bruysten of Yunus Social Business. She also was featured in an article found in UDaily, A Practice-based Approach to Social Innovation on 2/25/2022. On 5/20/22 She received a Scholarship from Women Community Leaders and Their Impact as Global Changemakers.

The Wilmington Green energy company, Versogen, secured the Series A round of Venture Capital investment of 14,500,000$ in Versogen Company.

The Leon & Margaret Slocomb Professional Excellence Award for 2022 UD Award went to Tricia Monnig for being a great advisor.