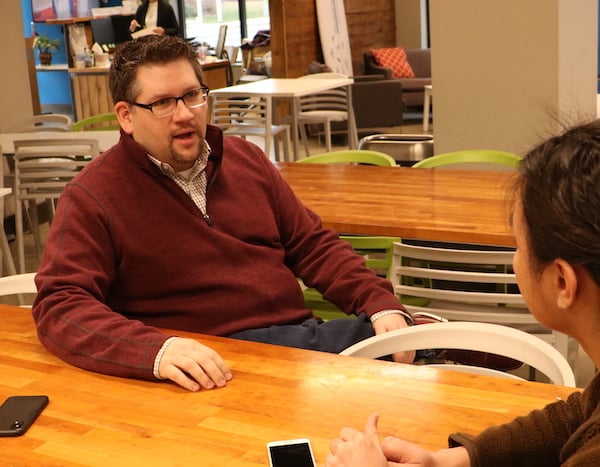 Career shifts for Mike Rinkunas have meant doing everything from hanging out of a helicopter with a video camera, to interviewing Lance Armstrong at the Boston Marathon. Even when not working, Rinkunas continues to explore new things to try, most recently becoming a licensed train conductor and locomotive engineer in his spare time.

From photography to engineering, Rinkunas likes to think of himself as a jack of all trades, or a kind of “universal man,” like the product of the classical education tradition – although, his background is anything but traditional.

In many ways, Rinkunas is an entrepreneur through and through. By the time he joined Horn Entrepreneurship as the new Associate Director of Commercialization Programs this past February, he already had a long history of entrepreneurial expertise to bring to the table.

“My goal is to help people avoid the mistakes that I’ve personally made or have seen a lot of others make,” Rinkunas said. “I am by no means a genius. I kid that 20% of what I say is gold, the trick is it’s up to you to figure out what 20% it is because I don’t know what 20% it is.”

Rinkunas’s entrepreneurship story starts at Lehigh University, where he received his masters degree in industrial engineering and soon started his own industrial training business, at one point working with companies like Energizer Battery.

Rinkunas then pivoted to corporate training before eventually settling into marketing. He provided marketing services to the brands of Rodale Inc. (now Hearst and Crown Publishing Group, respectively), the publishing company known for their health and wellness lifestyle magazines, including Men’s Health, Women’s Health, and Runner’s World.

Although not necessarily a runner himself, Rinkunas played a key role in producing video content for Runner’s World, and along the way he also had opportunities to produce videos for eBay and Toys-R-Us.

When smart phones eventually democratized the realms of photo and video, Rinkunas sensed that the new technology was going to completely transform the field of competition. By the time he sold his marketing business, the company was the top producer for behind-the-scenes content for Rodale’s magazines.

Rinkunas then went to Dreamit Ventures, a venture fund where he discovered his passion for working with startups and problem solving for new businesses.

“The genesis of a business is where I’m best,” Rinkunas said. “Especially with startups, you don’t know where things go… You have to be wide across all those skills initially to stand it up, and as time goes on you start specializing. It’s fun, I get to learn something new everyday.”

When the opportunity to join Horn presented itself, Rinkunas felt that this career shift – if not comparably less unanticipated than previous ones – was a natural decision and the next step for him.

“Having worked with the folks here and having built the relationships, when the opportunity presented itself, I’m excited,” Rinkunas said of joining the Horn team. “I’m excited to be part of the brand, the institution. Watching what has transpired in Horn, even as a very young program, got me excited.”

Now, Rinkunas hopes to bring his wide-ranging expertise and business experience to advance Horn’s mission of empowerment through entrepreneurship education.

“So my goal and hope here is to keep building on the successes, and to refine it and build it more in a way that’s even better and more nationally recognized,” Rinkunas said.

And although he’s settling into his current position, Rinkunas has not stopped learning, and does not plan on surrendering either his MacGyver-like resourcefulness, or jack of all trades philosophy any time soon.

“The way I’d describe the job is, I’m part drill sergeant, part therapist, and part herder of cats, because every day you don’t know what comes in,” Rinkunas said. “You don’t know what walks through the door. So it’s generally never dull.”