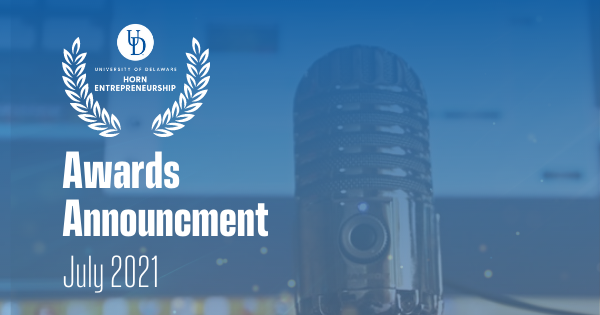 Horn Entrepreneurship is excited to announce all of the accomplishments and successes of our community of creative thinkers, trailblazers and world-changers this quarter.

GetPotluck, founded by Hope Vega and Abubakarr(Abu) Kamara, and UP Cycle Design, founded by Sierra RyanWallick and Michelle Yatvitskiy, were both listed on Technical.ly’s Delaware RealLIST Startups, along with Suryanuj Gupta and Shahroze Ali’s Backyard Gig which received an honorable mention.

A group of 14 undergraduate students led by freshman entrepreneurship major Emilie Delaye won second place in the Up to Us Campus Competition organized by Net Impact, winning $14,000 for the team alongside other prizes and resources.

Three teams of students were selected as winners of the inaugural MakerGym Make it Happen Challenge: Sophia Angeletakis and Metehan Cebeci of Hydra Cultivation Network; Sierra RyanWallick and Michelle Yatvitskiyvof UP Cycle Design and Samuel Koeck of Coral Connectors. The teams won award packages for this semester that include a monetary grant for supplies and materials, hands-on training and design consultation totaling more than $5,000.

Student startups HomeHarvest, by Jackson Gaffney and Zane Fracek, and Coral Connectors, by Samuel Koech, were selected as winners of the University of Delaware Ratcliffe Eco-Entrepreneurship Fellows (REEF@UD) inaugural pitch event, awarding them with a one-year stipend, prototyping funds, and continued mentorship support to continue pursuit of their ideas.

Backyard Gig was one of the ten finalists for the First Founders’ Podcast Pitch Competition, gaining their spot by placing in the top five for total listeners on their pitch with over 6,000 listens.

Adam Stager and his business Tric Robotics were awarded $100,000 in grant funding through NIFA SBIR Phase 1 for the development of robotics that utilize UV-C light as a chemical-free pesticide alternative.

Dr. Yushan Yan’s business Versogen was selected for the fourth cohort of companies to participate in the invitation-only Shell GameChange Accelerator Powered by NREL (GCxN). Selected as one of three clean-tech companies, the highly selective program will provide Versogen with access to financial resources, state-of-the-art facilities and technical experts with the U.S. Department of Energy’s National Renewable Energy Laboratory (NREL).

Versogen CEO Dr. Yushan Yan was named the 2021 recipient of the prestigious Carl Wagner Memorial Award from the The Electrochemical Society. The award, given out every two years, recognizes Yan's excellence in research on polymer electrolytes and electrocatalysis, as well as significant contributions in the guidance of students and colleagues in education, industry, or government.

Dr. Robert Ddamulira, a Researcher at the Biden School’s Center for Energy and Environmental Policy and founder of GreenPesa, joined the Board of Trustees of the Delaware and Pennsylvania Chapters of The Nature Conservancy.

Elyte Energy and Versogen were each named finalists in the inaugural Startup302 competition, with Elyte Energy taking home Best Science-Based Startup and a $5,000 prize purse.

Dr. Yushan Yan’s hydrogen fuel company Versogen was spotlighted on Delaware Business Times in an article describing their rebranding from W7Energy and their new focuses.

Avkin, a business founded by alums Amy Cowperthwait and Amy Bucha that develops and manufactures high-fidelity wearable medical simulators to provide realistic scenarios for healthcare students, has launched a new product. Unveiled with the name Avwound, the device simulates pressure ulcers and open wounds and is the 7th device released by Avkin.

Ajit George and his business Second Chances Farm were featured on Technical.ly for their Presidential-themed spice collection and cookbook and other pivots over the course of the pandemic.

GetPotluck and Wilminvest were two of the ten finalists out of 27 ventures for the First Founders’ Podcast Pitch Competition, each gaining their spot by placing in the top five for total listeners on their pitches with over 2,000 listens. GetPotluck went on to win third place in the competition, bringing the team a prize of $1,000 in funding.

Recent UD alum Carmela Dow launched her business 4TMRW after losing her job during the pandemic, using her apparel design and entrepreneurship background to create and sell a variety of masks in different colors, patterns and sizes. She was highlighted earlier this year on DelawareToday in a piece showcasing women who turned their part-time passions into full-time businesses during quarantine.

Blue Hen Founded Medical Simulator Company Avkin was featured on Technical.ly in an article describing the business’ growth since its founding and its innovative new telemedicine service.

UD alum and Horn Entrepreneurship Advisory Board Member Pete Wolf III was presented with an Outstanding Alumni award in recognition of his exemplary work and continued service on behalf of the University of Delaware.

Five startups founded by University of Delaware alum, Get Potluck, GreenPesa, TheraV, and Neggster, were finalists in Delaware Prosperity Partnership’s Startup 302 competition in April. After the finals, judges awarded amounts of $20,000 to Get Potluck, $20,000 to TheraV, and $5,000 Neggster as they were selected as winners in the Blue Hen Prize, NCC Innovator Award, and FinHealth Prize categories.

Patient Sortal, a business founded and led by University of Delaware alum Kenny Eck, was chosen as Global Health & Pharma’s "Most Innovative Healthcare Data Management Company - USA” in their 2021 edition of the Private Healthcare Awards.