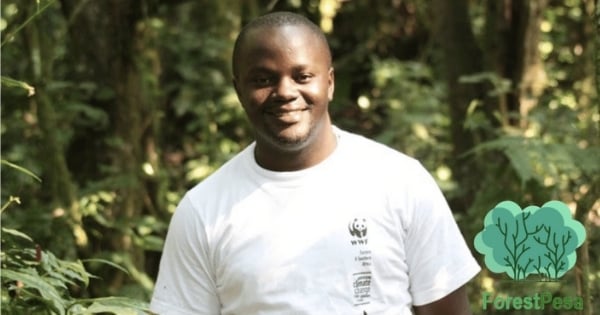 Dr. Robert Ddamulira is a firm believer in the power of people. In other words, he is convinced that any problem, no matter how daunting, can be solved through cooperation and a little bit of disruptive creativity – a rather simple conviction that informs Ddamulira’s entrepreneurial approach to the existential challenge of climate change.

On one hand, as a researcher at the Biden School’s Center for Energy and Environmental Policy at the University of Delaware, Ddamulira is regularly immersed in the policy side of problem solving for our environmental dilemmas. Outside of academia, however, Ddamulira leads two ventures that put his underdog philosophy of entrepreneurship into practice, one of which was most recently announced as a winner of the Beyond Tourism in Africa innovation challenge.

Ddamulira’s business, a mobile application called ForestPesa, was recognized by the World Wildlife Fund for Nature (WWF), the Luc Hoffmann Institute, and the African Leadership University (ALU) in their joint innovation challenge that sought to discover sources of income that would promote environmental sustainability and economic resilience in Africa (specifically, business ideas that existed outside of the continent’s more traditional tourism-based economic sector).

The honor placed Ddamulira and his colleague, Judith Chatiza, on the international stage as one of 15 top ventures selected from over 300 applicants from around the globe. As part of their victory, the ALU also granted them access to an 8-month virtual incubator program to help take ForestPesa to the next level as a business.

The concept for ForestPesa, an online marketplace that allows micro-forest owners to directly exchange their verified carbon with local and international carbon buyers, is derived from the carbon offset market, which was first introduced by the United Nations in the 90s. This market allows for international trading of carbon offsets as a strategy for countries to limit their carbon emissions in such a way that aligns with international agreements.

“I pay you money to ride a bike and, in exchange, I drive a car which emits carbon,” Ddamulira proposed in one analogy for the carbon offset market. “The amount of money which I pay you is equivalent to the amount of gas I use. So at the end of the day, we don’t end up with two cars on the road.”

In this case, instead of dealing with transportation-based carbon, ForestPesa deals in forests. Aside from being beneficial for plenty of other reasons, forests may as well be humankind’s strongest natural solution to sequestering, or storing, carbon (as trees are able to pull carbon from the atmosphere).

Consequently, forests become a highly effective resource with which to trade carbon in the offset market. Through ForestPesa, buyers of carbon (those choosing to drive the car, as in Ddamulira’s analogy) can help to maintain and conserve these much-valued forested lands by paying micro-forest owners (those riding the bike, and making some money while doing so).

Apart from this sustainability function, ForestPesa also addresses a significant equity problem in the carbon offset market by seeking to level the playing field for smaller players. Specifically, Ddamulira described how the market has long favored larger, sometimes corporate owners of land as the primary participants in carbon trade. ForestPesa disrupts this by equipping small land and forest owners – who have historically gone unsupported and unrecognized – with the tools they need to participate in the carbon offset market and to become key players themselves.

“Within the U.S., 36 percent of all forests are owned by small landowners,” Ddamulira said. “That category of forest landowners control the largest share of forests – larger than the federal government, than the state governments, and larger than the corporations… But nearly less than 1% of them are participating [in the offset market].”

Ddamulira’s second venture, GreenPesa, shares a similar philosophy of utilizing local and individual-level strategies to address the overarching challenge of climate change. Both businesses also borrow from the Swahili word for economy, or money, “pesa.”

GreenPesa’s business model, although rather intuitive, is a practice which may elude many business owners who do not think to investigate further into the factors that determine their monthly energy bill.

“For most energy consumers, they pay very little attention to the actual breakdown of their energy,” Ddamulira said. “They don’t get insights on what is actually responsible for their energy bill at the end of the month. What we are trying to do is make that data more transparent and, by doing so, we enable the business owner to have better control of their energy expenditure.”

GreenPesa accomplishes this through an energy audit which analyzes equipment, machinery, and operational processes in order to get a clearer picture of a business’s energy dynamics. Ddamulira also utilizes energy sensors that allow for an even more detailed breakdown of energy consumption.

Ddamulira then takes the energy usage data he has collected and benchmarks it against national standards of average energy consumption. This directs GreenPesa towards potential energy inefficiencies in business procedures, key information which their clients can use to save on both cost and energy.

GreenPesa has already had success with a number of local clients in Newark, namely businesses along Main Street and parts of the University. He ultimately has ambitions to begin automating sensors to activate or switch off equipment and machinery in order to further optimize efficiency practices.

However, Ddamulira expressed that GreenPesa’s greatest strength may lie in their ability to shine a light on inefficiencies in energy use that would otherwise go unnoticed by the average energy consumer.

“Our research has shown that by just changing behavior with zero [financial] investment, you can cut your energy bill by about 22 to 10 percent,” Ddamulira said. “For some businesses, like the ones that we’ve been working with, the business owner doesn’t even know what equipment they have. So just that lack of information means you have less control over how your energy bill will play out.”

At the end of the day, Ddamulira’s belief in strength in numbers is what drives him to always be on the cutting-edge of creative solutions to our most urgent environmental problems. While climate change often seems intimidating and futile when faced alone, Ddamulira expressed that, when aggregated together, individual action can bear profound results – results that will ultimately have the potential to disrupt the entrenched systems that no longer serve us or our planet.

“Every day we are voting with our dollars on whether or not this problem gets solved,” Ddamulira said. “And in the same way that we have created a repeated and scaled trend that has resulted in carbon emissions, based on the buying choices that we make, we can choose differently.”