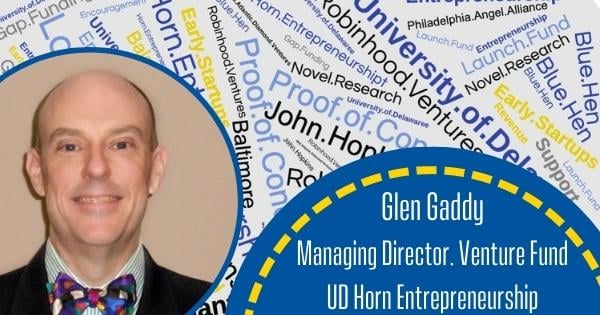 Meet Glen Gaddy joining the Horn Entrepreneurship Team in a new role as Managing Director of the University Launch Fund. Gaddy plans to utilize his extensive experiences as an entrepreneur and innovator from both his corporate and academic roles. He comes to Horn as the Managing Member of long standing angel investor group, Robin Hood Ventures, and serves as chair of Mid Atlantic Diamond Ventures, the leading quarterly early stage pitch forum in the Mid Atlantic.

In his current role at Robin Hood Ventures, he is instrumental in helping early stage startups in high tech innovation find that narrow path encountered between an initial discovery and recurring revenue. Gaddy’s role in Mid Atlantic Diamond Ventures (MADV) is more of coach than funder as the MADV forums seek to identify promising startups and give them the coaching and support they need to successfully pitch at a forum so that they are invited to investment groups such as Robin Hood Ventures.

Gaddy joins University of Delaware Horn Entrepreneurship to manage the new University Launch Fund, a $6MM target fund focused on pre-seed investments spun out of the University of Delaware. The purpose of the Launch Fund is to enable promising startups to reach the minimum level of investment readiness needed to successfully attract private investment from angel and venture capital investors who are active in the regional ecosystem.  The Launch Fund will be advised by an external investment committee and venture partners working closely with the emerging companies.

The University Launch Fund is an evergreen fund, unlike most that run for a period of time with finite funding. It will seek to return capital to the fund to support future companies without paying returns to outside investors. With this fund, Horn expects four to six new companies to be funded each year. Each company will add new jobs and positively impact the economic development efforts in Delaware.

As an undergraduate student at Johns Hopkins University, Gaddy started in biomedical engineering, one of many pre-med tracks. He discovered breaking things apart and building them better was not how medicine worked and switched his major to materials science and engineering. This major fueled his early entrepreneurial mindset where he imagined the multitude of things out there needing to be fixed and problems to be solved.

After graduating, he immediately went to work for a big fortune 500 manufacturing company in Pittsburgh, Pennsylvania. Six weeks later, his research group was eliminated in a reorganization. He was stunned! His first professional experience left him questioning how he could assure a certain future. Gaddy realized he should be more entrepreneurial for himself. He returned to Johns Hopkins as a graduate student. While pursuing a Ph.D. in materials science, Gaddy began buying and renovating houses, a business that continued even after he graduated.

After spending time in both engineering consulting and real estate development, Gaddy went on to lead a segment of research and development for DAP Products, a company that specializes in caulk and construction products such as silicone sealants, adhesives, and spackle.  Gaddy was able to fully understand the customer experience because he used DAP products in his business buying and renovating homes - an advantage that eventually led him to direct  R&D for the company.

During his tenure for DAP Products, he helped the company incorporate green technology into a new generation of products and relocated DAP Products’s laboratory from Dayton, Ohio, to Baltimore, Maryland.

When DAP Products was sold to RPM International, Gaddy returned to Johns Hopkins University again - to research. “The marketplace was ready, Johns Hopkins was ready for launching companies from their abundance of intellectual property,” Gaddy recalled. “They were ahead of the curve on commercialization efforts being considered at most universities.”

Gaddy ran a program in the Advanced Technology Laboratory (ATL), a new industry facing program under the direction of the Associate Dean of Engineering.  The core value of the ATL was to take University research assets and turn them into assets for our partners in industry and the government.  “It was at that point, I learned three things that are really important now in helping early startups. First, I learned grant writing and raising funds. Second, I learned about working within university structures. And, third, I learned about the ongoing challenge that exists between a core mission within a university of educating students and doing novel research which can be commercialized.”

In addition to his efforts at Robin Hood Ventures, Gaddy is a regular contributor to the early stage community through work with the Pennsylvania Angel Network, Ben Franklin Technology Partners, the Angel Venture Fair, PACT, Temple, Drexel, and Penn.  Outside of the startup ecosystem, he is a thoroughbred horse owner, proud parent of two, husband, and an avid, albeit poor, basketball player.

Gaddy is excited for the possibility at University of Delaware, “We've got a pool of students who are already oriented in commercialization. Awesome! It's our [Horn’s] moment in time. It is entrepreneurship’s moment in time. Let's support it, encourage it, figure out how and reward it.”

Gaddy has a strong inclination for the support and the encouragement of early stage startups and that support shows in his work with the Launch Fund. Gaddy believes true success is about balance - balance between lab work and writing a funding application, or taking a meeting with a potential purchaser, or being part of your startup community where you might build out your team.

Will the University Launch Fund have an impact? You can bet on it.