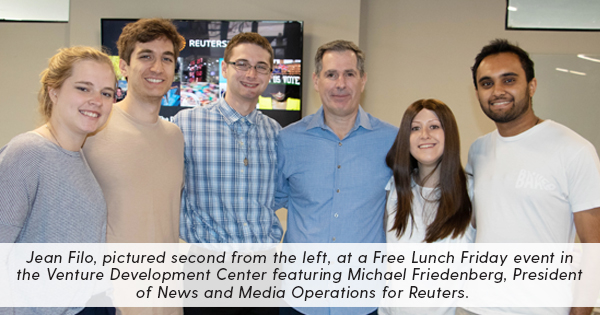 Jean Filo, the former president of Entrepreneurship Club (E-Club) at University of Delaware, has found freedom in entrepreneurship while pursuing a graduate degree in medicine. Filo, who emigrated to the United States from Syria with his family, says the life he left behind in Syria has inspired him to adopt an entrepreneurial mindset and leverage his personality traits to create opportunity.

“Even though I’m pursuing medicine, long term I see myself doing more business than medicine because there’s freedom [in business],” explained Filo. “The war that happened in my country took the freedom that my parents had built. They made a good living in Syria. Now they’re working part-time jobs, doing things they don’t enjoy. That’s not freedom. I don’t want to ever be in that situation and I don’t want my kids to have to go through that same experience. Medicine is a job but I don’t think business has to be. You can reach and help so many people with business.”

Jean’s journey to discovering entrepreneurship has allowed him to develop insights and lessons to act on in the future.

5 a.m. wakeups and the cold shower

“I think there’s something to be said for being uncomfortable,” said Jean. The former E-Club president believes that by pursuing things that make you uncomfortable, you can increase your value in your own eyes. And after struggling with hot showers and dry skin in Delaware’s cold winter climate, he put that belief into practice by showering cold.

“I wake up every day at 5 a.m. and I work out and I hate it,” said a smiling Jean. “I take a freezing cold shower every morning and I hate it, but now I’ve started to like how I feel after. The science isn’t set on whether the cold shower is more beneficial than a hot shower or not, but mentally it gives me value. It’s difficult but I do it consistently. I can get through uncomfortable things and still feel good on the other end.” 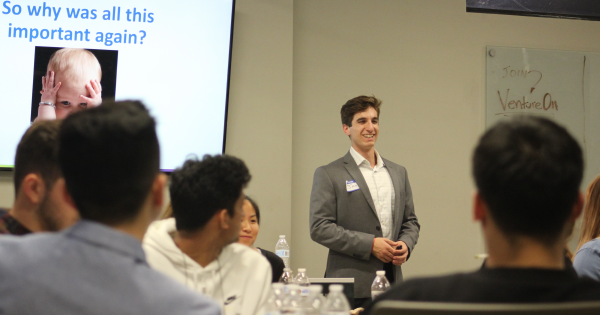 Finding opportunity in a new place

“Coming to the United States is the best thing that’s happened to me in my life,” shared Jean, though he admits that he may not have had the courage to move if it wasn’t born out of necessity. The former E-Club president finds that by placing yourself in new environments you begin to explore diversity on a deeper level and push your knowledge past the surface.

“Coming to Horn is, on a micro-level, similar to finding yourself in a new country. It brings new thoughts into your day to day life from people outside your major and your friend groups. People talk about diversity in a physical context, but there’s a deeper level to it. When you meet someone who doesn’t think the way you do, you have to question what you think and then you have to solidify what your values are. We don’t spend enough time thinking about how we interact with others and how we view the world around us.”

New places and new people bring more than just new experiences. By learning from people around you, you can find deeper meaning in daily events and in your own career path. New perspectives help bring value to your own decisions, or can help you change completely. Nothing occurs in a vacuum and by surrounding yourself with new and differing views, you come to grips with what you truly believe and value.

Harnessing anxiety in a positive way

“We can always get stuck in the day to day things and forget to appreciate life,” said Jean. Overthinking and worrying incessantly has become mainstream, but what if you could take that anxiety and flip it on its head to derive something positive from it? Jean thinks it’s possible to channel any anxiety into positive growth and grow in your appreciation for the world around you.

“I’ve been an over thinker my whole life. It’s been who I am. I called my dad yesterday because I had an epiphany and I said ‘Hey, what if our anxiety is a blessing? What if it’s too much energy and we don’t know where to direct it, so we always direct it at the wrong thing?’ So I started focusing on channeling my thoughts into positive growth for my future. After realizing that, it’s helped me get excited about getting to work on the future goals I have. I just sit with my goals, focus on what it’s going to take to get there, and channel that energy into producing results toward that goal.”

Anxiety doesn’t have to be a curse, and in Jean’s eyes, it can serve as an immense blessing. Instead of letting anxiety consume yourself and impacting your daily activities in a negative way, try to manifest your anxiety into a positive reality. Work to channel that restless energy into something you’re proud of. Push yourself to create something of meaning and channel that energy into tangible growth, or progress for your future goals.